Not so many years ago, the ski resort industry was largely comprised of independent mountains owned by all manners of people. Skiers were guaranteed disparate experiences from mountain to mountain because every owner had a different budget and a different idea of what makes for a good ski resort. Each mountain was like somebody else’s house. But some of that variation that we’ve come to expect in skiing has vanished. No two mountains will ever be exactly the same, of course, but the things that distinguish them as different continue to erode. Even cafeteria food, which has certainly improved across the whole industry during the last decade, has coalesced around certain items and cuisine.

Ski resorts are businesses. Bad businesses, in many cases. But just as the building giants Pulte and Toll Brothers figured out how to manufacturer 4,000 square-feet of profitable exurban perfection, a kind of template has emerged to engineer and operate a profitable mountain. As that formula has spread, the skiing experience, from lifts to food to dining to lodging has become narrower, more homogenous. Many travel writers these days croon about unique experiences, about seeking trips with terroir all their own. Ski travel, however, has diverged from the path of Rick Steves, and followed a path more similar to that of Disney World. Vail, in fact, hired its new director of summer operations from Disney.

There are sound business reasons for these kinds of moves. Parks like Disney learned long ago how to leverage their operations for optimal returns. Ski resorts thought they figured it out with real estate in the early 2000s, but that proved to be something of a one-time trick: a condo can only be sold by a developer once, and vacation properties don’t weather downturns well. Squeezing profit from actual mountain operations is necessary for any mountain that wants to thrive, grow and, perhaps, buy other mountains. Something that one particular company, Vail Resorts, has done with aplomb during the last five years.

Uniqueness, by its very definition, is a hard thing to quantify. That’s why we don’t include it as an input for our Perfect Resort Finder, where users can create their own resort rankings.

But singular experiences still exist in skiing. Finding them takes more work, unless you know exactly where to go. The crew at ZRankings does know where to go and we’ve got a short list of utterly unique skiing experiences. These places don’t necessarily have the best skiing, the best snow or the best anything (although several of them do), but all of them are unlike anything else, anywhere—and all of them should be considered pilgrimages very worthy of at least one trip. There’s something for everybody on this list, even intermediates who may not be ready for the first spot on the list: 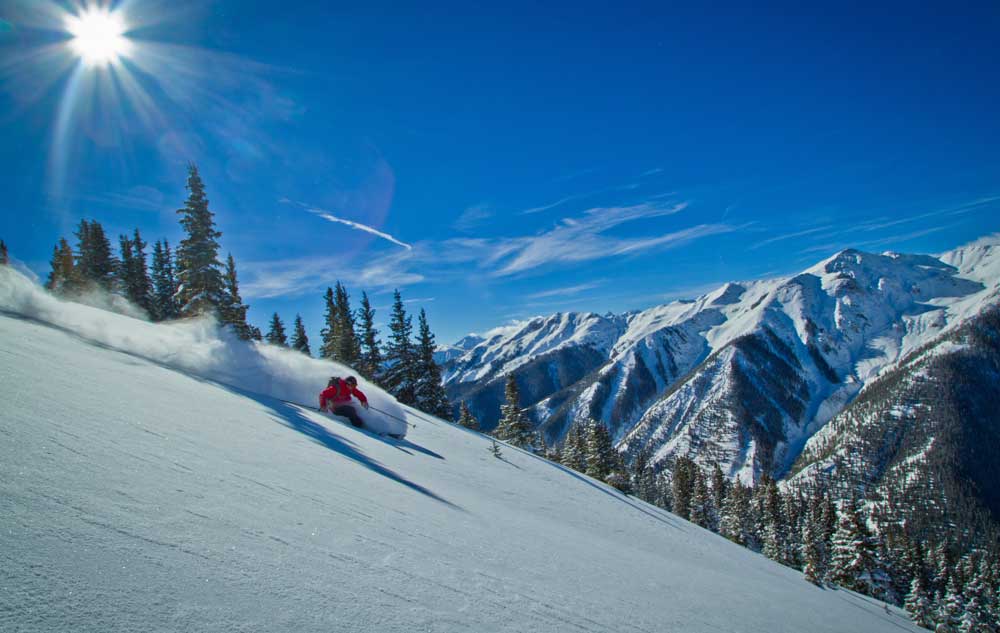 The first time I skied Silverton, the parking lot intimidated me. Hard core people acting hard core: inspecting their avalanche equipment, duct-taping frayed seams, taking tools to skis, drinking gasoline. And then Jen Brill, who owns the place with her husband Aaron, got everybody together at one end of the lot in front of the only chair lift at Silverton. It was her safety speech. “There will likely be avalanches today. If you’re in one and remain on your feet, try to ski out of it at a 45-degree angle.”

At this point, I was worried that my friend and I had gone too far, that we’d finally attempted something that would end us, right there, in front of 100 other people. When reached the top of the lift and skied with our guide to a spot that held bottomless powder at a rather un-intimidating angle—the stuff of magazines—our nerves were fried. My friend took two turns and then, out of pure anxiety, biffed on his third turn and went down face first, packing snow into every orifice on his head.

After that, we got things under control. It became clear that my buddy and I were the best skiers in our group, despite the face-plant. Our edginess faded away and we had one of the best days of skiing I’ve experienced.

You don’t have to be John Wayne on skis to enjoy Silverton, you merely have to be good enough that you’re justifiably comfortable on any kind of in-bounds run at a place like Alta or Jackson Hole. Not necessarily Corbet’s Couloir, but certainly the Alta Chutes (which are at Jackson, not Alta).

What’s unique about Silverton? Everything. This is basically a backyard lift operation that runs up the gnarliest, most serrated range in the lower 48, paired with perhaps the finest guide and avalanche control operation in North America. It’s utterly professional in every way that matters–the ones that keep you alive—and rough-hewn in all others. There is no permanent building. Skiers drink après beer in a giant yurt and rent their avalanche gear, if not self-equipped, from a station in the front of a school bus that’s been jammed into the side of the mountain for more than a decade.

Skiers ride the single lift up and hike from there. Somtimes the hike is 20 vertical feet, sometimes it’s 800. Doing the latter at an altitude of 12,500 feet isn’t fun if you’ve just arrived the day before from the coasts or the Midwest—so it’s best to arrive several days early, take some turns at Telluride or Purgatory and let your lungs adjust.

The best part of the winter, January through March, is guided-only skiing at Silverton. The daily lift ticket during this time is $139, one of the great bargains in skiing. A single drop from a helicopter can be added to any skier’s lift ticket—if there is space—for an additional $159. It’s an affordable way to experience heli-skiing without dropping $1,000 on a single day. And the terrain around Silverton is better than where most heli operations take you.

We don’t include Silverton in our standard ski resort rankings. It simply can’t be ranked with normal ski resorts who cater to all calibers of skiers, families and whatnot. Silverton is an experience all its own, unlike any other—and one that all serious skiers should pilgrimage to at least once. 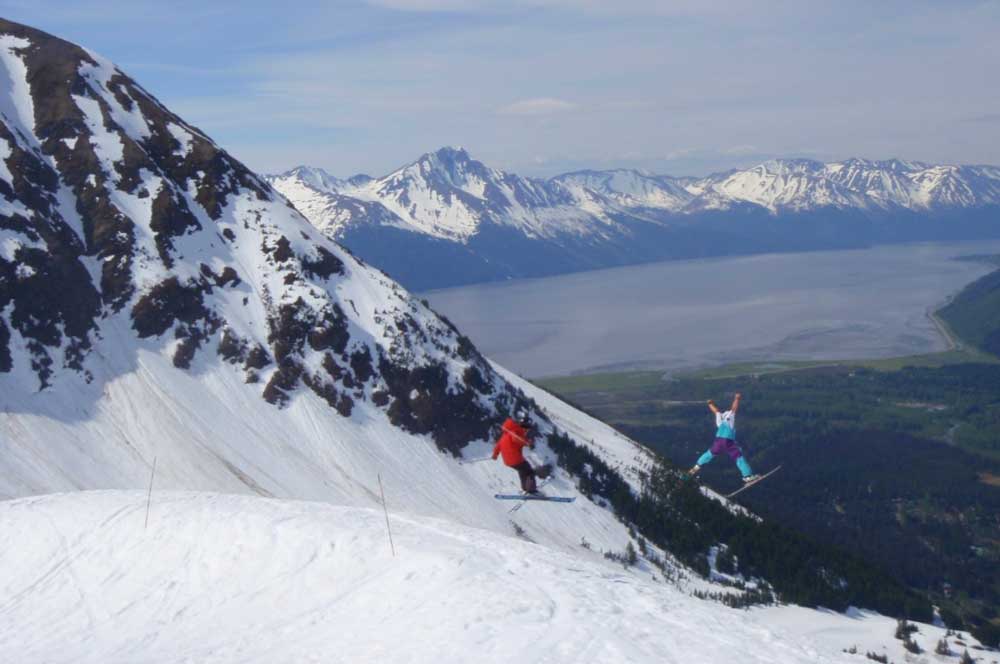 Alaska has a weirdness all its own, and Alyeska certainly shares in this weirdness. Because of its northerly latitude, the lifts operate later in the day. In the spring, when conditions are going to corn in the Rockies, the snow at Alyeska is still cold and piling up. The chairs don’t turn until 11 am and they run until 6 pm, and there’s still plenty of light.

There’s one hotel of consequence on the slopes: Hotel Alyeska. And there’s one beer that everybody drinks: Alaskan Amber. If you don’t like it, get a Heineken, go to the corner and say nothing. The nightlife at this resort is limited, but a few spots go off. It all has a frontier-ish kind of feel to it.

The ocean is often within sight of the slopes, as an inlet from the Gulf of Alaska makes it nearly to the bottom of the resort. This fact also means that, rather than a base lodge at 8,000 feet or higher, skiers get to sleep at sea level, which makes for solid nights of slumber from the start—and hikes and bootpacks that are far easier than those in Colorado, Utah or Wyoming.

If you make a trip here for five to seven days and don’t get a big dump, you were rather unlucky. This is the only mainline resort whose snow totals compare with that of Alta: 514 inches of true snow per year, with 49.2% of months bringing more than 90 inches of snow.

A flight into Anchorage takes more time and a little more money than flying to Denver, Salt Lake or a similar destination, but skiers get sea-level oxygen and the chance to notch a trip to perhaps the hardest-to-get-to, and weirdest, state of them all. The drive from the Anchorage airport to Alyeska is an easy 45 minutes that runs parallel to a sea inlet packed with iceberg floes and the occasional whale sighting.